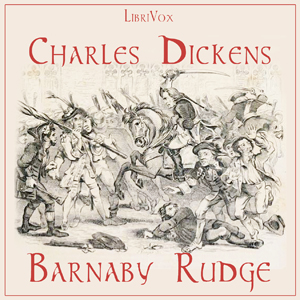 One of the two Historical novels Charles Dickens wrote, Barnaby Rudge is set around the ‘Gordon’ riots in London in 1780. The story begins in 1775 with Barnaby, his Mother, and his talking Raven Grip, fleeing their home from a blackmailer, and going into hiding. Joe Willet similarly finds he must leave his home to escape his Father’s ire, leaving behind the woman he loves. Five years later these characters, and many others whose lives we have followed, find themselves caught up in the horrific Protestant rioting led by Sir George Gordon. The mob which reaches 100,000 strong, gets out of hand, and there is danger to all in the path of their destruction. Charles Dickens skillfully weaves the lives of his many loving and many wicked characters through the rioting, and shows how this uprising changes so many lives. As a side note, Edgar Allan Poe is said to have been inspired by Barnaby’s raven Grip when he wrote his famous poem,”The Raven”. (Summary by Mil Nicholson)

Reviewer: Tokyo Yosh - favoritefavoritefavoritefavoritefavorite - July 11, 2010
Subject: Barnaby Rudge
Taking on a Dickens story is daunting, to say the least, especially one with 82 chapters. But Mil Nicholson has inspired in me a whole new appreciation of this author. What a difference a voice makes! Ms. Nicholson is a reader beyond compare, bringing this story alive with her consistent portrayals of a myriad of characters, allowing us to feel all the emotions that Dickens intended. Libravox - thank you for making the right choices.

Reviewer: aimzzz - favoritefavoritefavoritefavoritefavorite - March 16, 2010
Subject: Wow, just wow...
The comment by Philippe Horak gives a concise and excellent overview of the book. I'll focus on the reading by Mil Nicholson. "Reading" does not begin to describe how she handled the book. She seems to become the story. In the 2nd half, I often forgot there was a reader. Not only did she assume the attributes of the many characters, but she paces the tempo with the action. If find it a little slow in the beginning, hanging around the fireplace at the Maypole, don't make a snap judgement... hang on & get ready for a wild ride

Reviewer: Philippe Horak - favoritefavoritefavoritefavoritefavorite - December 1, 2009
Subject: A spectacular recording!
Dickens' first historical novel is set against the infamous 'No Popery' riots that were instigated by Lord George Gordon in 1780, and terrorised London for days. Prejudice, intolerance, misplaced religious and nationalistic fervour, together with the villains who would exploit these for political ends, are Dicken's targets. His vivid account of the riots at the heart of the novel is interwoven with the mysterious tale of a long unsolved murder, and a romance that combines forbidden love, passion, treachery and heroism. A typically rich cast of characters, from the snivelling Mrs Miggs and the posturing Simon Tappertit to the half-witted Barnaby Rudge of the title, ensures high entertainment.
A fantastic recording indeed! Mil Nicholson’s extraordinary reading of the novel is a real symphony to listen to. An impressive performance of 29 hours. Many thanks!

Uploaded by librivoxbooks on October 26, 2009